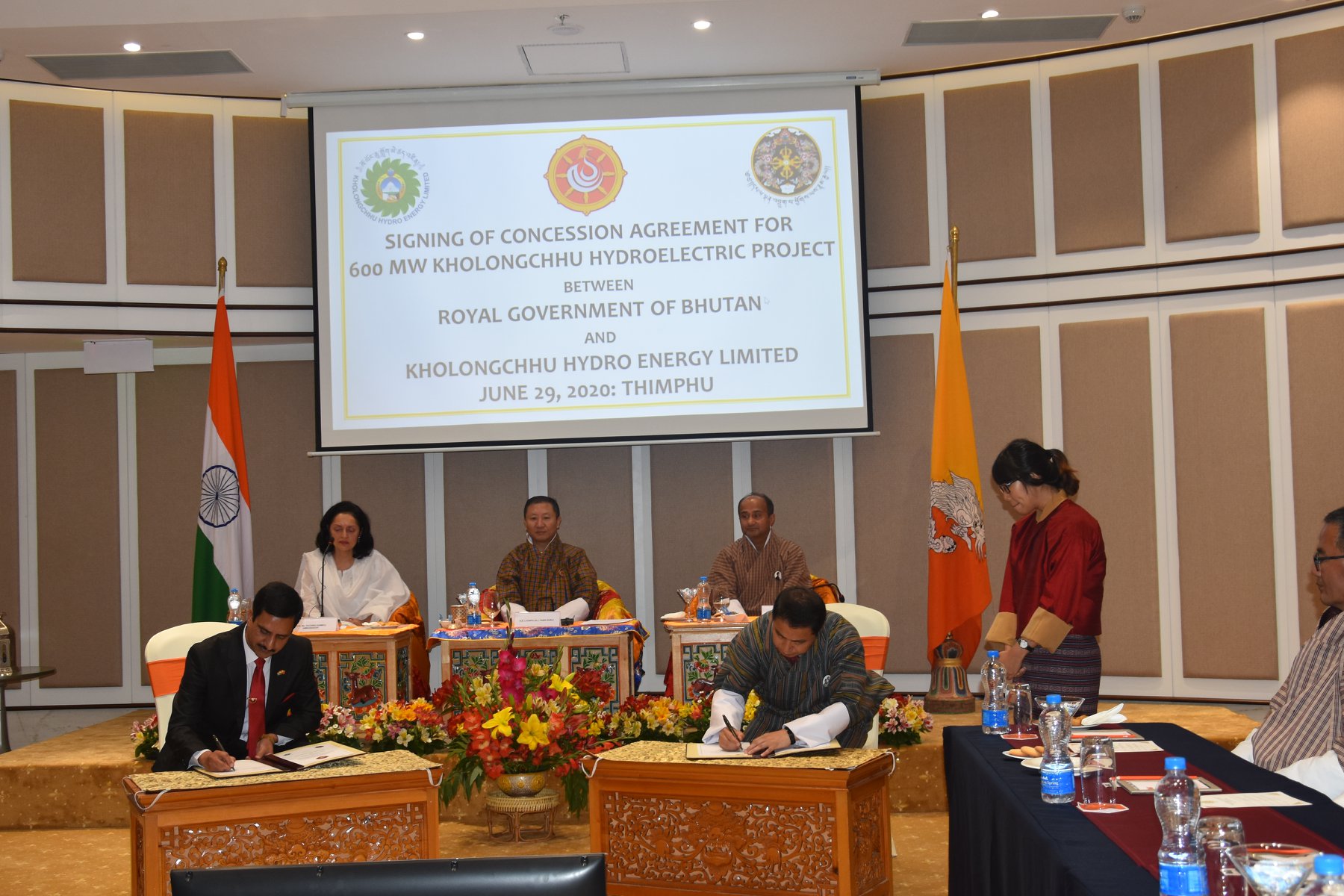 The Concession Agreement of Kholongchhu Hydroelectric Project was signed between the Ministry of Economic Affairs, Royal Government of Bhutan (RGoB), and the Kholongchhu Hydro Energy Limited (KHEL) on 29th June 2020. The Agreement was signed through a Video Conference in the presence of H.E. (Dr.) S. Jaishankar, Hon’ble Minister of External Affairs, Government of India, and H.E. Lyonpo (Dr.) Tandi Dorji, Hon’ble Minister for Foreign Affairs, RGoB.

Although the pre-construction works of the Project that commenced in early September 2015 are nearing completion, the award of the main civil works for the construction of the dam, headrace tunnel and the powerhouse has been delayed as the two Governments were still under discussions to finalize tariff determination for the sale of its power on a long-term Power Purchasing Agreement (PPA) for signing of the Concession Agreement (CA). With the recent finalization of the tariff setting formulation between the RGoB and the GoI, the Concession Agreement for Kholongchhu was signed. With this, the construction of the Project will commence. The Royal Government is thankful to the Ministry of External Affairs, Government of India and the Embassy of India in Thimphu for their full support and contributions in finalizing the tariff setting formulation.

The Concession Agreement provides a legal basis or instrument whereby concession rights are given to the developer to build, own and operate the Project for a concession period of 30 years, and then transfer it to the RGoB in good running condition at free of cost in keeping with the Bhutan Electricity Act and Bhutan Sustainable Hydropower Development Policy. Special care has been taken to incorporate obligations of the developer to provide maximum local benefits like employment, giving preference to local goods and service providers, and most importantly, the engagement of Bhutanese contractors in the construction of the main components of the Project. During the construction, KHEL is expected to employ about 500 people and its contractors will be able to employ even more. The other immediate benefits of the Project are access roads connecting gewogs and shortening of travel time, widening of the national highways near the project, development of integrated township and the renting of accommodation from the local community at Doksum.

KHEL is the first Joint Venture Company to be undertaken under an Inter-Governmental Agreement signed for the Joint Venture projects to be constructed through a Public Sector Undertaking of the Royal Government of Bhutan (RGoB) represented by Druk Green Power Corporation (DGPC) and a Central Public Sector Undertaking of the Government of India (GoI). KHEL was incorporated on 12 June 2015 to implement the 600 MW Kholongchhu Hydroelectric Project in Trashiyangtse. The project is being financed through a debt-equity ratio of 70:30 with 50-50 equity holdings between the DGPC and the Satluj Jal Vidyut Nigam Limited (SJVNL). The foundation stone for the Project was laid by His Excellency the Prime Minister of India on 16 June 2014 and the Ground Breaking Ceremony of the Project was graced by His Royal Highness The Gyaltshab Prince Jigme Dorji Wangchuck on 18 September 2015.

The Project is expected to generate about 2568.88 million units annually. With the implementation of the Joint Venture project, the Indo-Bhutan cooperation in hydropower development will be further strengthened.